Original design gowns and dresses!  The collection takes inspiration from my pet betta fish during college. I really want to keep the collection going, but these were the only four I have had up to this point. If I think back real far we did have a lot of goldfish.  Our pond also had a unique fish I gave a name.

Nightshade – Nightshade was my first betta, and his name was a callback to one of my favorite movies. A midnight blue or purple betta, I enjoyed the purple and red accents he had. We also played jazz hands a lot together.

Nightshade or Ciel was the inspiration for this series. I always imagined an elegant flowing gown with finned gloves and a tail of sorts. I’d love to see it in real life.

Ciel – Ciel was a halfmoon betta with primarily earthen tones. I think what attracted me to him at first was the aquamarine sheen his body and fins gave off.

Ciel’s halfmoon fins inspired me to fashion the dress like a flamenco dress. A lot of people really like the design and I bet it would be a lot of fun to make and wear!

Ross – A white veiltail with red and blue markings on the head, fins, and back third of the body. He got to live in a 10 gallon tank with a small pagoda.

Ross got his name from Betsy Ross, since his coloration was red, white, and blue. He grabs inspiration from classic American female symbols of justice and freedom. Those in turn inspired by Greek and Roman statues. I felt a single shoulder dress would fit well.

Becky – Something of an outlier in this set. Becky is based on Bloop, the cory catfish I got to keep up with tank cleaning for Ross. Even when they were going solo in the tank they had a chipper personality and the ability to withstand a lot.

Since Becky isn’t based on an actual betta, and Bloop was short finned, I felt she would look better in more of a flirty cocktail or homecoming dress.

Bookmarks are made with extra heavy cardstock and laminate. 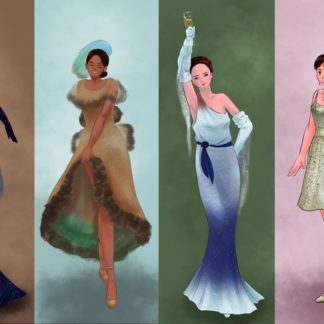